The Making of Above & Beyond

How do you create an exhibition about something that hasn’t happened yet?

That’s one of the challenges we faced when we started creative development on “Above and Beyond.” We knew we’d nod to the first 100 years or so of aviation history, but our primary mission was to focus on what’s still to come – the future of aerospace – the stuff that hasn’t been built yet.

We gathered our small team in the back room of a tiny restaurant near the Santa Monica, California airport, a place rich with aviation history and a hang out for local pilots. We thought the atmosphere would help get our engines turning. Not that we needed much revving up – we were already beyond thrilled about this project.

We got off to a flying start with – what else – a paper airplane contest. Throwing paper airplanes around naturally led to tossing ideas around. Some took flight; some not so much. We talked about how much had happened in the first century of flight. The great accomplishments, the cutting edge technologies, the ongoing challenges – these all started with innovative ideas that many dismissed as crazy or impossible. Innovation, as the foundation on which the future is built, emerged as our propelling theme.

We talked about where innovation in aerospace starts. People – dreamers really – looking at the world around them and seeing not just what is, but what could be. And asking, “What if?” What if we could fly? Fly faster? Go higher? Farther?

As we continued brainstorming, a swarm of exciting “what if” questions arose, and we answered them with some pretty exciting immersive activities: 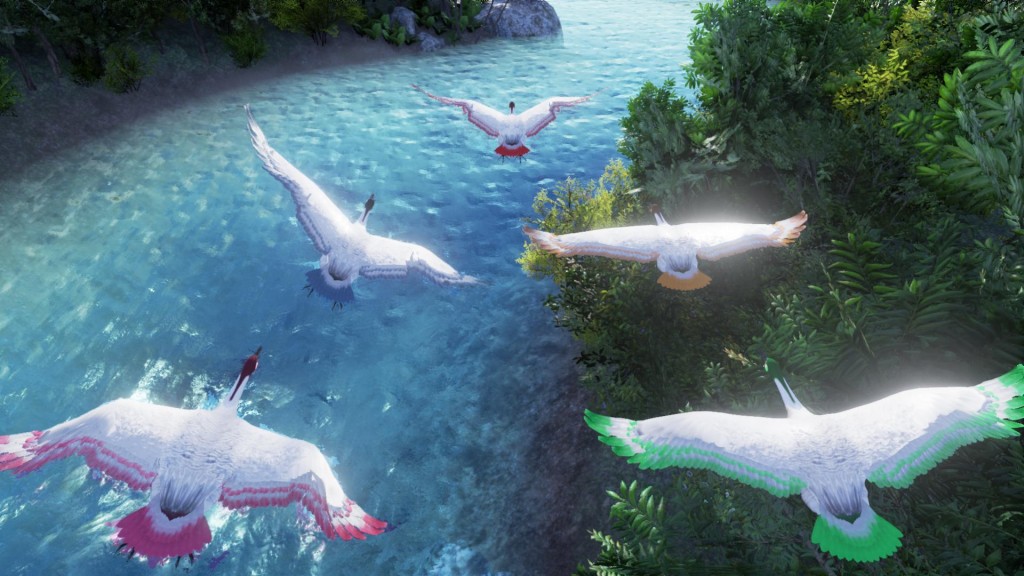 Who hasn’t dreamed of flying? “Spread Your Wings” is your chance. It’s a group game where you join a flock of birds for migration.

You see your human silhouette on a large screen in front of you, and learn why birds can fly but you can’t. Then, your silhouette magically transforms into the shape of a bird, and you learn about lift, gravity, thrust and drag. Flap your new “wings” and your onscreen bird takes off.

You’ll glide and turn, dive and climb, all the while trying to stay in V-formation behind the lead bird as the flock flies south over startlingly beautiful terrain. At the end, after landing in a tropical paradise, you’ll see a surprise photo of you and your entire flock, just as you looked mid-flight – but still human.

What if you could design and fly your own fighter jet? 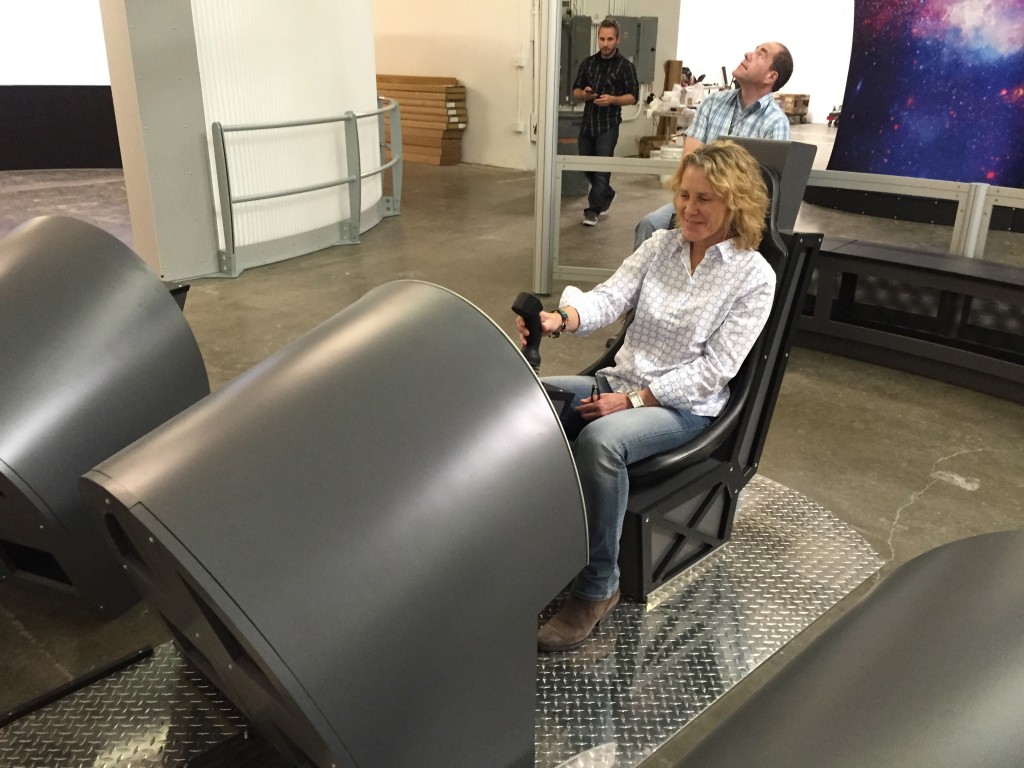 Well, in “Full Throttle” you can.

First, you design your jet by picking the fuselage, wings and tail, as well as the color and tail number. Then you jump into the cockpit and use the control stick to pilot your jet through an exciting virtual racecourse in the sky.

But the big question is, can you go fast enough to create a sonic BOOM?

What if you could just hop on an elevator to Space? 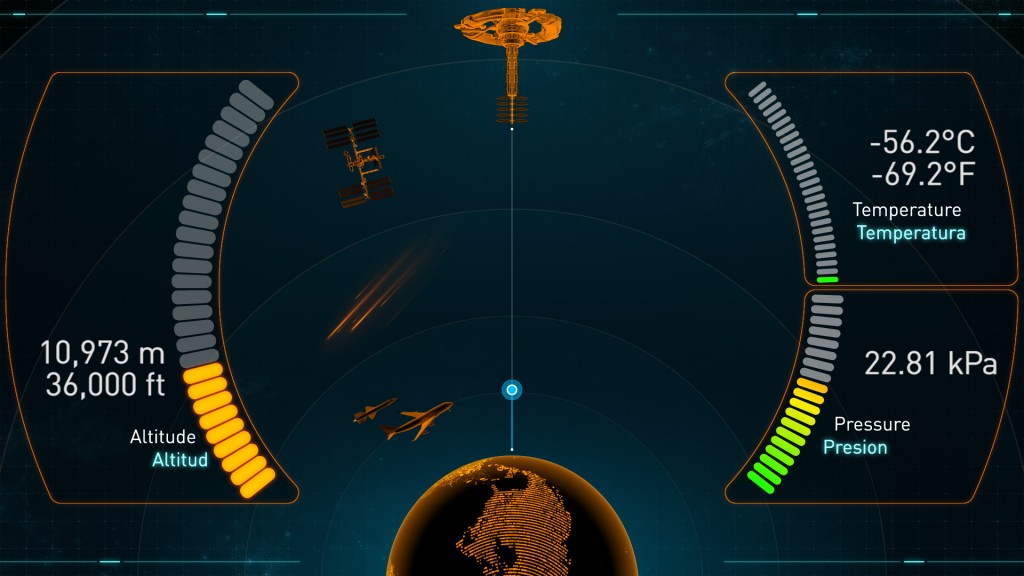 We learned that there are several projects underway exploring concepts for an actual space elevator. So we decided to beat them to it and make the very first “International Elevator to Space.”

A large video screen is your “window” to space, so you can see birds, aircraft, spacecraft, and satellites fly by as you ascend. A head-up display gives you data like altitude and outside air temperature, and delivers fun facts at each atmospheric level, pointing out things like the Van Allen Radiation Belts or the Karman Line, where space begins. 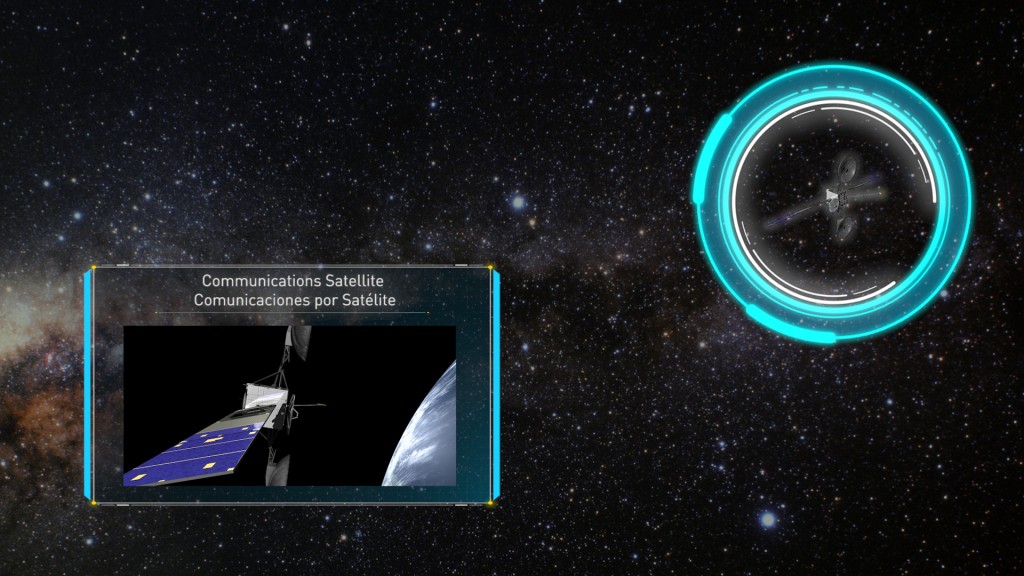 At the top, you get a sneak peek at the International Space Port – still under construction – soon to be the main hub for deep space travel. If you dare, look through the lower observation windows and take in the breathtaking view of Earth that astronauts enjoy. Then brace yourself for Turbo descent back to Earth!

What if you really could go to Mars? 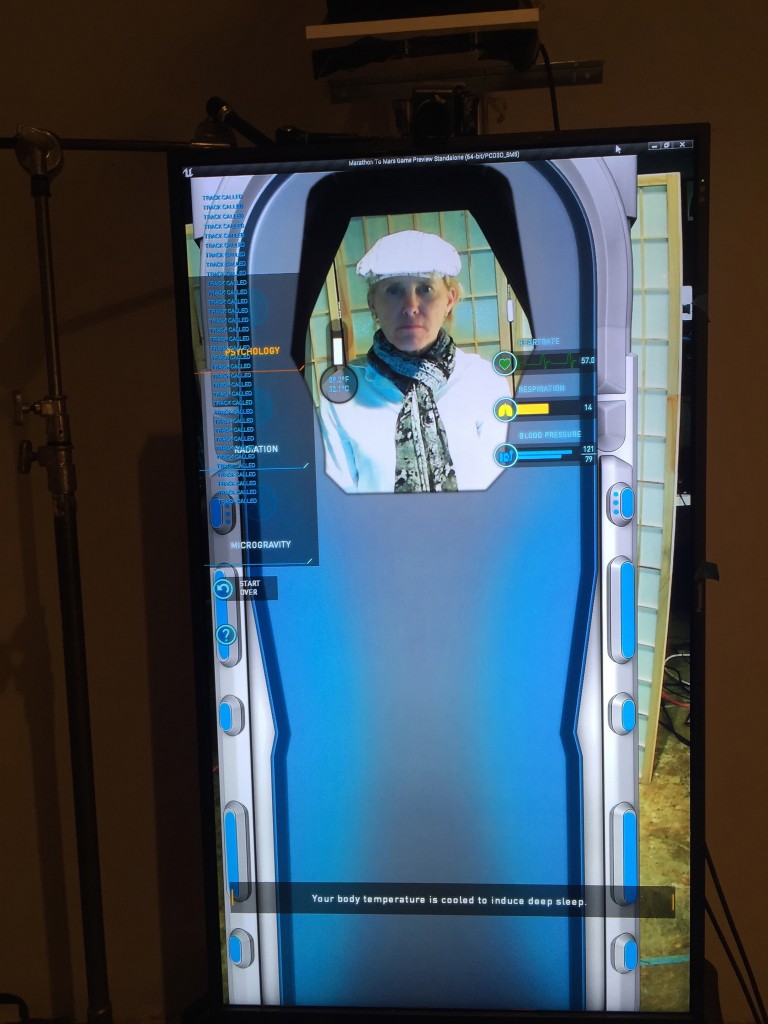 Recent headlines promising we’d be on our way to Mars in the not too distant future got us thinking – would people really want to go if they knew how challenging the trip might be?

“Marathon to Mars” is an exploration of the psychological and physical challenges inherent in a months-long journey to the Red Planet. An interactive “magic mirror” invites you to explore some of those challenges and to “try on” potential solutions.

To alleviate the boredom and homesickness of a long trip – how about a nice long nap, courtesy of suspended animation? To protect your cells against radiation damage, try eating foods rich in antioxidants. You might be surprised which have the most. And to counteract the effects of microgravity, see how artificial gravity could not only prevent you from floating willy-nilly all over the place, but keep your muscles and bones strong too.

If you’ve got the right stuff, and make it through all three challenges, you’ve earned your Passport to Mars, complete with a photo of you in a cool new space suit.

What if you could clean up space junk? 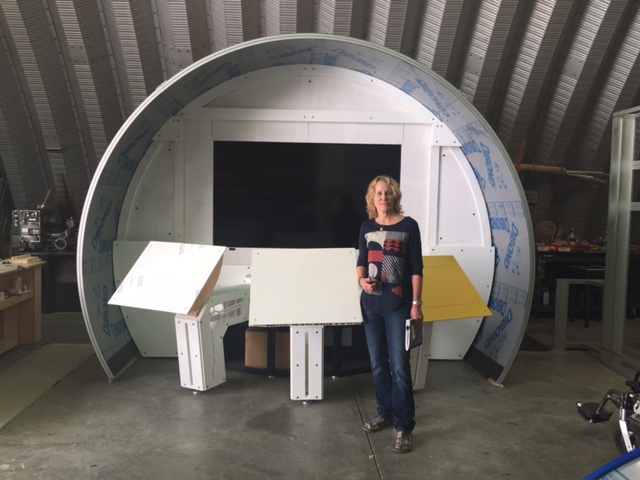 An increasing awareness of environmental issues, especially among kids, led us to wonder – what if those issues are in a different environment – like space? Why don’t we give you a chance to make a difference there?

“Space Junk” is a rapid-paced three player competitive game where you try to clean up orbital debris using some out-of-this world solutions.

A large digital display shows lots of space junk in Earth orbit. Your “junker” station touchscreen gives you three options for eliminating all that debris:

Each type of debris and solution has a different value. Can you rack up enough points to qualify for the super elite squad of Space Junkers?

All of these ideas came up pretty early in our concept process. Typically, a fair number of ideas drop off as we work through them and discover that we weren’t quite the geniuses we thought we were in the moment. But these five concepts all survived, because they hit our themes, covered great subject matter, and sounded like they’d be a blast. We all wanted to build them so we could play them.

Along the way we faced lots of challenges – getting the technology to work in the activities, finding unique objects to help illustrate the themes and complement the interactives, acquiring cool footage for the media pieces, and so many more. But we also got to do some way cool stuff – fly fighter jet and helicopter simulators, go behind the scenes at NASA, walk between the giant blades of a real wind tunnel, put on VR headsets to play in a virtual design studio, and collaborate with some of the smartest people on the planet. Yes, we’re talking rocket scientists.

Many months and hundreds of bad puns later, we’ve got a fleet of interactive and immersive experiences, all designed to bring the future of aviation to life, spark imagination, and inspire a new generation of dreamers to take on new challenges in aerospace.

What if you are one of them?